Posted by Alaska State Museum at 11:34 AM No comments:

Posted by Alaska State Museum at 11:32 AM No comments: 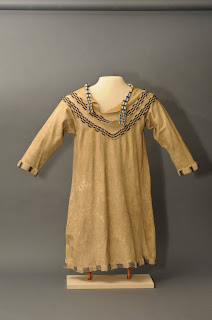 This caribou-skin dress was collected by Abram Brown Webber, who worked in Alaska in the salmon canning business in the late 1800s. Skin garments, similar to those worn for festive occasions by the Dena’ina, were also made on commission for non-Natives. After returning home from a trip to Alaska, Webber gave this dress to his daughter Pearl Webber (born around1885) when she was about ten years old, and it was subsequently passed through several generations of their family until it was donated to the museum in 2009.

The museum collection contains few other articles of children’s clothing, and so this reason too this dress is a very welcome addition. Too, while the museum has two other Dena’ina adult-sized garments of this period, this dress has a unique beaded “double-V” about the chest, as well as an unusual beaded collar. The museum collects objects both common objects, as well as pieces such as this exhibiting rare variations. 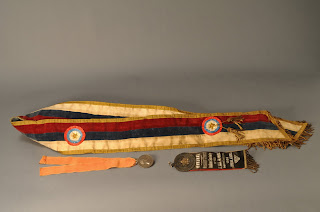 This set, which includes the sash and the ribbon signified membership in the Saint Basil Russian Orthodox Brotherhood (established in 1902). This brotherhood, which was predominately Alaska Native, was attached to the parish of Saint Nicholas Russian Orthodox Church in Juneau, Alaska. This church, which was built and established in 1894, has a long history of being the home of several Orthodox Brotherhoods. The establishment of Russian Orthodox Brotherhoods’ amongst the Tlingit in the 1890’s-1900’s was part of an effort to continue Alaska Native education in Russian Orthodox customs and theology, but also to promote temperance and mutual aid. The Tlingit utilized these brotherhoods to strengthen their relationship within the church structure, thereby maintaining the power and prestige of the traditional Tlingit aristocracy within these new institutions. Although the Russian missionaries often promoted their establishment with the idea that the brotherhoods would help put a stop to traditional native customs and beliefs that were” incompatible with Christianity”, the Tlingit very skillfully utilized the brotherhoods to further indigenize the Russian Church, even organizing brotherhood membership along matrilineal clan lines.
The Saint Basil Brotherhood sash and ribbon are both in the colors of the flag of the Russian Empire, with the ribbon identifying the brotherhood and founding year in gold lettering, along with a sequined gold six-pointed star.
The sash/ribbon set was donated to the museum by Brian Wallace, whose family are lifelong members of Juneau’s Tlingit Orthodox community.
Russian Church Brotherhood Sash and Ribbon
Early 1900s
Gift of Brian Wallace
2007-17-1& 2007-17-2

This sash and ribbon belonged to Charlie Jimmy, one of the founders of the St. Basil the Great Russian Church Indian Society, who wore them during meetings of the society held in the L’eeneidí Yaxte Hít (Dog Salmon Clan Big Dipper House) in the Juneau Indian village. Made of fragile silk, their survival is nearly miraculous, and due to the care given by Margaret Cropley, Dorothy Wallace, and her son Brian Wallace, the donor.

In the late 1800s, the Russian Orthodox Church established mutual aid societies and brotherhood groups to strengthen Orthodox values, but Tlingit members used these organizations to strengthen their community and reinforce traditional social structures to counter overwhelming pressure to assimilate and adopt “civilized” customs as introduced by the missionaries. Sashes, made of delicate silk in the colors of the Russian flag, may be the forerunner of sashes used by the Alaska Native Brotherhood. The ribbon is inscribed: “Marshal, Russian Church Indian Society of the St. Basil the Great, Organized January 1, 1902, Juneau, Alaska.”

Russian Imperial Medal “For Zeal” (Presented at Unalaska, circa 1852):

A Russian medal bearing the likeness of Emperor Nicholas I presented to Russian Orthodox priest Innokentii Shaiashnikov (1824-1883) of Unalaska. Of Russian and Aleut descent, he is the member of an important cohort of Alaska-born priests that spread Orthodoxy to the furthest reaches of Alaska. He served the church at Russian Mission and St. Michael, and in 1844 was installed as parish priest at Unalaska, where he served for over three decades. He is remembered as a teacher, leader, musician, translator, and linguist of the Aleut language. The medal passed down through several generations of the family of Nicholas Gray, a teacher in the Russian Orthodox Church in Unalaska, and later postmaster and representative of the Alaska Commercial Company. 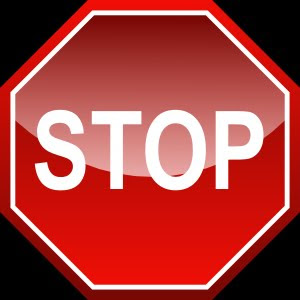 Posted by Alaska State Museum at 9:55 AM 2 comments: 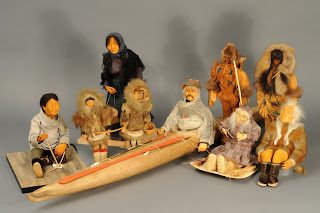 By Steve Henrikson, Curator of Collections

For over one hundred years, the Alaska State Museum has collected and preserved art and artifacts representing Alaska's history and cultures. Given Alaska's diversity and complexity, and with limited funding and space, the museum must systematically and objectively decide what to collect. With a sense of historical perspective, and following strict criteria, the museum selects both old and relatively new items that provide a view into Alaska’s past and present.
In May 2010, the Alaska State Museum will open a very special exhibit called “From Gift to Gallery” featuring over 100 of the approximately 500 objects acquired since 2004. The show will provide fascinating information about the objects themselves and insight into the collecting process. How does a museum select items to represent life in Alaska? How does it recognize works of art that will stand the test of time? Is an object collected because it is unique and rare or because it is so commonplace and ubiquitous that it represents the daily lives of average Alaskans?

The exhibit includes a broad number of objects—from military artifacts of the Aleutian Campaign of WWII to a set of miniatures of firearms delicately carved in ivory by a Yup’ik or Inupiaq artist. It also includes a rare 1872 mural of the fur seal rookery on St. Paul Island by naturalist Henry Wood Elliott, a 19th century Athabascan girl’s dress, Tlingit spruce root baskets, and artifacts newly recovered from Alaskan and Russian shipwrecks. Together, these objects—like the collection as a whole—form a well-rounded and balanced representation of Alaska’s history and cultures.

This amazing exhibit will be at the Alaska State Museum from May 7 to October 23, 2010. It will be well worth your time to stop by with family and friends to experience this exhibit. Seeing these special objects and learning about the collection process will leave you with appreciation and understanding for the ongoing efforts to collect and preserve our legacy.